Many Options Exist to Back Up Computer Data & Prevent Loss 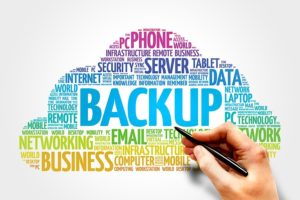 Many Options Exist to Back Up Computer Data & Prevent Loss

One South Dakota woman – like most moms – proudly captured photos of her children as they grew. She carefully organized the photos on her computer and created a backup on an external hard drive.

But life with three kids was busy, and a year quickly passed without an additional backup. Then the unthinkable happened. The laptop was stolen.

“I lost lots of valuable files, but it was especially devastating to lose over a year’s worth of memories of my kids,” she said. “I should have been better about backing up my files.”

From finances to photos and everything in between, if you use a computer to store any type of information, it’s crucial to back up your data to prevent loss.

“Creating a backup is definitely something that a lot of people don’t know about or don’t think about,” says Golden Shield Agent Chris Ehrisman.

He should know. The Golden West Golden Shield program helps customers with computer issues, including data loss. Data loss can occur not just from theft, but also from drive failure, viruses or file corruption, disaster damage from things like floods and fires, and human error or accidental deletion.

Back Ups Protect Your Data

“If something happens, and there’s no backup, then that data is just gone,” Ehrisman says. “They don’t always realize this until it’s too late, but people have lots of things on their computers that they would not want to lose.”

Backups can be done in multiple ways. When selecting a method, consider the backup size, setup complexity, the user’s comfort with technology, portability and security requirements, budget, and the need for on-site or off-site backup. Here are some options for review.

External hard drives – External drives are easy to set up, relatively cheap, provide multiple storage size options, are portable and are usually large enough to store a lot of data. However, these drives have the same risks for data loss as the hard drive in your computer.

USB flash drives – Thumb drives, or USB flash drives, are plug-and-play, ultra-portable and inexpensive. They are good for transporting data between locations efficiently. However, they are also prone to their own data loss risks, including a durability issue.

Disc media (CD-/DVD-Rom & Blu-Ray) – Burnable disc media aren’t used as frequently, but they are cheap, portable, and can be used for offsite storage. Yet they have limited storage capacity, a short shelf life and are considerably slower than hard/flash drives for transferring data.

Cloud Backup Options – Backing up your data in the cloud, which involves storing files on a remote server, is the latest trend in backup technology. Data stored on cloud services are accessible from any internet-connected device. Cloud storage is offsite, so the data is not subject to the same disasters as your computer, and the backup process can often be automated.

Any backup method will work as long as it’s utilized.

“You need to pick a backup method and keep doing it,” Ehrisman says. “If you make a backup once but don’t ever update it again, you’ll still lose a bunch of stuff when the unexpected happens.”