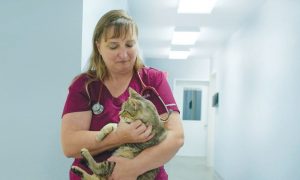 Growing up, Teri Michaels was passionate about two things: nature and animals. After debating a career as a forest ranger, she followed in her older sister’s footsteps and became a veterinarian. It’s a profession with decidedly fewer trees, but she does work closely with animals.

Just don’t ask her whether she’s a dog or a cat person.

“I like them both,” Teri says diplomatically. “They all have their personalities. It might depend on the day.” 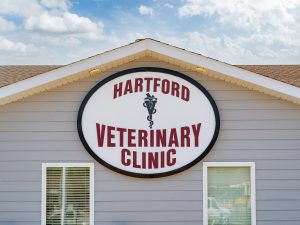 Hartford Offers Best of Both Worlds

Teri is no stranger to small communities. A native South Dakotan, she grew up in Huron and lived for a while in Clear Lake. She met her husband, Phil, at Iowa State University, where she was attending veterinary college.

“Coming from Chicago, he preferred not to be in a small town,” she says. “When you’re in a bigger city, there are amenities. You can go out to eat anytime you want, any variety of foods you want.”

After graduation, the couple settled in Osseo, Wisconsin for several years before returning to South Dakota in 2009. Hartford offered the best of both worlds: a small town feel and close proximity to a larger metropolitan area. Teri had previously worked in veterinary medicine in Clear Lake and Osseo; this time around, she decided to open a clinic of her own. When a former ice cream shop hit the market, she made an offer. In December 2009, Hartford Veterinary Clinic opened for business — three months after the couple’s last child was born. If it sounds like a lot to take on at once, Teri says the stars had all aligned.

“The economy wasn’t the greatest at that time,” she explains, “So it was a good time to be buying real estate.” 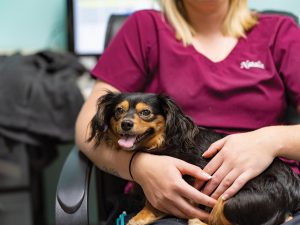 Most of Teri’s patients are cats and dogs. She also sees her share of “pocket pets” such as rabbits and rats. She has worked on large animals in the past — cattle, horses, sheep, and alpacas — and nearly had an encounter with a creature with very sharp teeth.

“I almost got to look at an alligator that somebody kept in their basement in Wisconsin during the wintertime,” she says. That appointment fell through … not that she was complaining. “I’m okay with that. I don’t typically work on the exotics.”

Her clientele aren’t just Hartford residents, either. Hartford Veterinary Clinic draws folks from surrounding communities including Sioux Falls. Because she is PENN hip certified, which is a method for evaluating hip joints for conditions like osteoarthritis and hip dysplasia, Teri occasionally gets people from as far away as Rapid City or North Dakota. She attributes customer loyalty to the care of her staff and the bonds she builds with people.

“I’ve had a number of people that say, ‘We moved further away but we’re still going there because of the relationship and caring that you have,’” she says. “Pets are not just pets; they’re family members. You want your family members to be cared for and treated well and we do a good job of that.”

So good that they have already outgrown their original 60’ x 24’ space. In 2016 they added onto the clinic, quadrupling in size. With Hartford continuing to grow, there is room for future expansion, as well. Teri added a four-car garage to the north side of the building with the expectation that it will one day be converted into exam rooms. 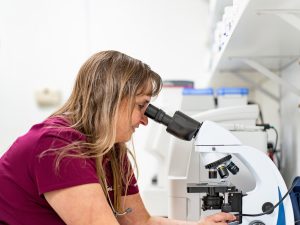 Teri embraces the small-town lifestyle that Hartford provides. It’s one of the draws that brought her and Phil to town in the first place.

“It’s a good community to raise my kids in,” she says. “That was part of the reason for starting here. My kids were going to school, so if I needed to leave to get them to different activities, it’s a little easier for me to get there. People know you and your kids. We help each other through good times and bad. It’s a very supportive small town.”

Golden West is part of that support system. Teri relies on the cooperative for her telephone and internet needs and appreciates their quick service.

“The Golden West staff is very reliable,” she says. “If I need something, it doesn’t take them long to get in and help. Being in a small community, they do a lot for us.”

Perhaps best of all, Teri appreciates the empathy of her clients — who aren’t just customers, but neighbors, too.

“When you own your own business, you need to be there,” she explains. “It’s hard to just leave. When family things have come up, the clients are very easy to get along with and very understanding.”

Nothing against Chicago, but things are probably a little different in the Windy City.

Check out our Meet the Owners Video with Teri Michaels of the Hartford Veterinary Clinic: