Fiber Represents One Small Step for Man, One Giant Leap for Telecommunications

Fiber Represents One Small Step for Man, One Giant Leap for Telecommunications

Fiber optic technology is out of this world: literally. When NASA sent Apollo 7 to orbit the moon in 1968, the crew broadcast live from outer space on televisions equipped with fiber optics. The technology was so new, it was classified as “confidential,” and operators required special security clearance.

Today, even non-astronauts enjoy the benefits of fast and secure fiber connections. Golden West has brought fiber to homes and businesses in towns and rural areas across South Dakota, from Edgemont in the far southwest corner all the way to Hartford, Dell Rapids and Trent to the east.

Golden West recognized the benefits of fiber optics early on and made upgrading its infrastructure through the Fiber to the Home (FTTH) project a top priority. The Gregory exchange, both town and rural, was the first to receive a fiber upgrade, in 2004. Expansion has continued nonstop ever since; each year, fiber projects are completed in communities throughout the Golden West service territory.

To date, Golden West has placed about 9,500 miles of fiber in the ground. OSP Engineering Manager Marty Huether has a great analogy to put that into perspective.

“For comparison, if we started in Wall, it is about 9,300 miles to the South Pole,” he says. “So, in essence, we would have just made the turn in Antarctica and started heading back to Wall.”

Currently, about 71% of Golden West subscribers are served by fiber. The cooperative is working to upgrade its entire service territory to fiber within the next five or six years.

The Benefits of Fiber Optics 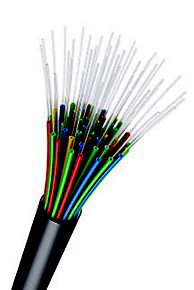 Fiber optics are made of long, flexible strands of glass slightly thicker than a human hair. They use pulses of light to transmit data over longer distances and at higher bandwidths than copper cables, which rely on electricity. This allows for speeds that aren’t only faster, but symmetrical – meaning the data speed and file transfer rate is identical for both uploads and downloads. Consistent speeds translate to no lag times or pixelated images during peak usage periods and allow for multiple devices to be connected simultaneously.

Fiber connections are more reliable and secure, and less susceptible to weather; they are unaffected by rain, snow, heat, and cold. In South Dakota, where the climate varies between extreme and more extreme, this means dramatically fewer service disruptions. The mailman isn’t the only one who delivers when the weather is rotten!

Though fiber is viewed as an innovative, cutting-edge technology, its use predates the NASA mission by over a century. The principle of guiding light by refraction dates to the 1840s; early applications primarily centered around illuminating body cavities for internal medical examinations and dentistry. In 1965, German physicist Manfred Börner pioneered the first working fiber optic data transmission system, paving the way for more modern uses in the telecommunications industry.

Today, you don’t even have to drink Tang to enjoy the benefits!