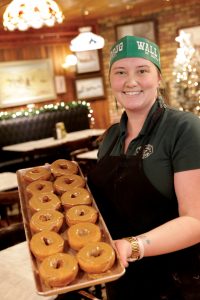 Wall Drug’s donuts are a sought-after treat for visitors of all ages.

Sure, there are the clever billboards that line the interstate for hundreds of miles. The free ice water and the legendary donuts. But after 90 years in business, the success of Wall Drug might just boil down to a single word.

Few can argue with that, but the business’s origins are far humbler. When they opened their doors on Dec. 31, 1931, they were a simple pharmacy with a different name … and few customers.

Struggling During the “Dirty Thirties”

Wall Drug wasn’t always the block-long attraction it is today. The original store was 24 feet by 60 feet and Ted and Dorothy lived behind a curtain in the back with their four-year-old son Bill. Those first few years in
business were no picnic.

“Ted and Dorothy worked really hard,” Rick says. “But, running a small business the first five years, going broke, little Billy in the back of the store thinking he’s going to be given up for adoption — that was very challenging.”

Especially given the drugstore’s location on the western South Dakota plains in the geographical center of nowhere. The Husteads had opened the store using a small inheritance as a down payment and gave themselves five years to succeed. This was during the Dust Bowl era, the “Dirty Thirties,” a period when unemployment hovered around 25% and people across the Great Plains struggled to survive.

“It didn’t look good,” Rick says. “They thought they were going to go broke.” 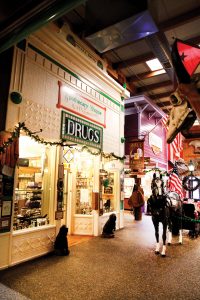 One hot summer day in 1936, Dorothy was giving Billy a nap and trying to get some rest herself. As cars drove by on U.S. Hwys. 16 and 14, headed from the Badlands to Rapid
City, she had a revelation.

“She’s listening to the cars go by and thinking, here we sit with a great big soda fountain and all the ice in the world, but no customers,” Rick recounts. “She went down to the store and said, ‘Ted, we’ve got to let people know we’re here. We should put up a sign saying, Get a soda, get a beer, turn next corner, just as near to Highway 16 and 14. Free ice water. Wall Drug.’ Ted thought it was a little corny, but it might work.”

Dorothy’s intuition was dead-on. Ted hired a local high schooler to help paint and put up a series of signs inspired by Burma-Shave. Before he even got back to the store, the first customers had already stopped in. If one sign made an impact, Ted wondered what 20 or 30 would do. So, he went out along the highway in both directions and added more signs. Today, there are around 300.”

It was a game-changer,” Rick says. “That idea saved the business.”

Advertising free ice water proved to be the spark that ignited their success. Ted and Dorothy were able to buy a house and expand, changing the name from Hustead Drug Store to the catchier, more easily remembered Wall Drug and relocating across the street. With triple the square footage they wondered how they would ever fill the space, but son Bill had grand ideas. After a stint in the Navy and a pharmacy degree from SDSU, Bill returned to the store eager to leave his mark. 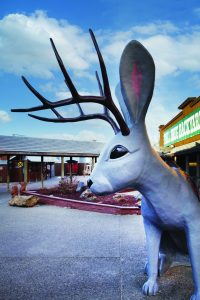 The jackalope in the backlot is ready for a ride or photo opportunity.

“He said, ‘If I go back, I want to make Wall Drug into something spectacular that the family is proud of and our customers really enjoy,’” Rick recalls of his dad. “He had a vision.”

Bill’s plan included expanding the soda fountain into a café complete with a Western art gallery boasting original works from esteemed artists like N.C. Wyeth and Harvey Dunn. The menu featured buffalo burgers, hot beef sandwiches, and donuts — staples to this day. The donuts are a California import. Ted was visiting relatives in San Bernardino and discovered a local donut shop. One day, he struck a deal with the owner.

“He said, ‘your donuts are really good,’” Rick shares. ‘“Would you let my son come out and work with you for a week for free to learn about them?’”

The owner agreed, and that turned out to be a strategic business investment. Bill came back knowing how to make the donuts, which earned rave reviews from customers. 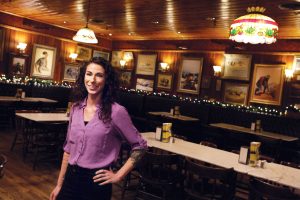 Sarah Hustead is ready to extend the family legacy to a fourth generation.

Bill implemented other key changes, including adding a Western shopping mall and traveler’s chapel and expanding the backyard. By the time he finished his career, Wall Drug had grown to 76,000 square feet. More importantly, it had become the destination Bill had long envisioned.

Rick carries on the family legacy today, and daughter Sarah — currently the manager and vice president — is poised to take the reins.

“This business, to be successful and continue to thrive, needs the family that owns it to work hard,” Rick says.

Golden West plays a backup role in everything from phones and internet to the store’s credit card machines. Wall Drug still attracts throngs of visitors from around the world; this past Memorial Day weekend broke attendance records. Having the support of the cooperative is instrumental.

“Golden West’s service and support are great,” Rick says. “We’re very fortunate to have them so close by.”

Rick believes the key to Wall Drug’s success is adaptability. The pandemic taught them how to operate more efficiently and convinced them the future is as bright as ever.

“There’s a silver lining to everything,” Rick concludes. “It proved that we can get really lean if we need to but still maintain that same experience when you come to Wall Drug!”