Renner Retires After 48 Years of Service

Renner Retires After 48 Years of Service

From party lines to blazing broadband, Golden West grew membership, services, and service area during Renner’s tenure on the board of directors.

When Rod Renner started on the board nearly a half century ago, Golden West provided dial tone to about 2,400 customers in 11 counties with less than 20 employees. Today, the company serves over 30,000 customers across nearly a third of the state’s geography with broadband internet, phone and cable TV and employs over 300.

“It has been an exciting experience to be a part of a growing company that has brought telecommunications to thousands of people in rural South Dakota,” stated Renner, the longest-serving board member at Golden West.

After 48 years, more than a dozen elections and over 800 meetings, Renner will put his nameplate away for the last time when he retires after the annual meeting on Sept. 26. While he didn’t do it alone, Renner was a major force in the growth and evolution of Golden West.

Yet only people who worked closely with Renner know the impact he has had on the cooperative and rural telephony in general. He is not the type of person who talks about his achievements nor does
he look for, or expect, recognition for his work. Nevertheless, when examining how far Golden West has come during his tenure, his prints can be seen everywhere.

“It is great to see people in small towns, tribal areas and everywhere else have the advanced communications systems which are needed in today’s world.”
Rod Renner 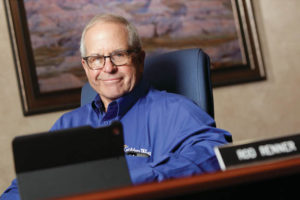 From the start, Renner’s mission was to ensure people living in rural areas received the telecommunications services they deserved. He championed advancements in technology every step of the way. From pushing for better telephone quality and burying lines for weather protection to business systems and fiber-optic technology, he embraced progress and voted to support it at every turn.

When Renner was first elected in 1972, private, one-party lines were the recent advancement in telecommunications. Telephone lines were getting moved from utility poles to being buried underground, and Golden West served many of the cold war missile silos in western South Dakota. Today, Golden West offers a wide array of services to customers across rural South Dakota. One of his most prescient moments on the board came when he voted to invest in a new service called the internet.

“It’s been a big joy of my life,” Renner said. “I am grateful for the experience and the opportunity to tend this and watch it grow.”

Renner knew that growing the cooperative was important to ensure its future viability. During his time on the board, the cooperative expanded many times in multiple ways. Golden West purchased or built about 45 exchanges across South Dakota, adding tens of thousands of customers to its service area. The cooperative also built a cable television company, an interconnect business and became an internet service provider.

“It is great to see people in small towns, tribal areas and everywhere else have the advanced communications systems which are needed in today’s world,” he said.

Recognized For His Efforts

Renner was recognized for his devotion to cooperative values and rural telephony when he was inducted into the South Dakota Cooperative Hall of Fame in 2015. Then in February 2020, the National Telecommunications Cooperative Association awarded him the James L. Bass Life Achievement Award for his work as a director and leader in rural telephony.

“There are a lot of extremely talented people in this business, and it was exciting to work with them and be a part of it. You can’t replace those experiences. I will miss that a lot.”
Rod Renner

Renner spoke fondly of the many people he met both in South Dakota and around the nation while representing Golden West. Through the years he served with over 40 other directors on the board, served as chairman for each of the last four general managers, and worked with hundreds of employees. He will miss the people the most, he said.

“There are a lot of extremely talented people in this business, and it was exciting to work with them and be a part of it,” said Renner. “You can’t replace those experiences. I will miss that a lot.”

His Involvement Will Be Missed

Golden West is grateful for his time and efforts working for the cooperative. “His retirement will leave a tremendous hole at Golden West. All of Rod’s knowledge, all his history advocating on behalf of rural communities, all the friendships – it’s going to be tough not to see him sitting in the board meetings,” said Denny Law, general manager and CEO of Golden West.

Golden West congratulates Rod Renner and will forever be indebted to him for his great work and dedication. While he will be sorely missed, Golden West wishes him the very best in his retirement.