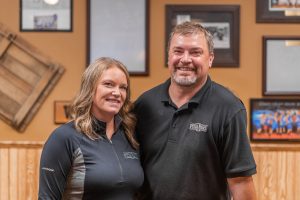 Adam DeJong cinched up his apron for his first job 25 years ago. He still walks through the front door every day — only now he owns the place. You might say it’s a permanent pizza his life.

Adam and his wife Kim are owners of the Pizza Ranch in Hartford. The franchise not only dishes up great food; it allows the couple to give back to the community … and that’s the most gratifying feeling of all.

Back to Where it Started

Adam was 18 when he first started at Pizza Ranch as a delivery driver. Back then, he never imagined the long-term impact the restaurant would have on his life.

“I started here in high school, and it was just a job,” he recalls. “I needed gas money!”

Nevertheless, Adam stuck around, even after enlisting in the South Dakota Army National Guard and attending college. His unit, the 1/147th Field Artillery B Battery based out of Salem, was activated during Operation Iraqi Freedom. He served for eight years before receiving an honorable discharge. Adam had considered careers in teaching or coaching, but realized he was happiest doing what he knew best and soon found himself back at Pizza Ranch, managing the Hartford store.

“I really like what I’m doing here. It’s basically working with kids and molding them in a way. Getting them to understand life a little bit. I also get to spend time with people in this community, which I love. At some point I just said, why would I want to go find something else when this is really what I like to do?”

By then he’d married Kim and they were busy raising a family. His wife fully embraced the idea, and the couple have never looked back.

Four years ago, Adam approached his business partner, Todd Pharis, and asked outright if he could buy the place.

“You always want to keep moving forward, and that was the logical next step,” Adam says. “I just said, ‘You know, Kim, if we’re ever going to do this by ourselves, now is the time.’ She was all for it, and Todd was great. He said absolutely; this is your hometown!” 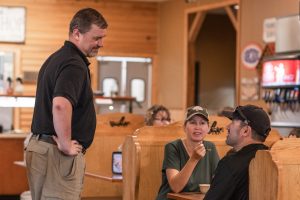 Helping People in the Community

As independent franchisees, Adam and Kim strive to make Pizza Ranch as good as possible. While corporate strives for consistency when it comes to the menu, the couple can put their own stamp on certain aspects of the business, such as the décor. One thing they would never change: Pizza Ranch’s commitment to supporting the local communities it serves.

“Pizza Ranch is all about helping people, and they really live by what they preach,” Adam says. “Any one you go to, you’re going to find they help people in the community. We have done so many fundraising events throughout the years. Anything you can possibly think of. We’ve helped groups and organizations earn money for all types of expenses. It’s really rewarding.”

Adam grew up in Sioux Falls until fifth grade and then went to West Central, where his basketball exploits made him a local sports legend. Kim is originally from Parker, half an hour southwest of town. Both consider Hartford their hometown.

“I love this community,” Adam says. “We’re so close to Sioux Falls, but just far enough away that we have a small-town feel.”

Pizza Ranch is a true family undertaking. Kim handles the bookkeeping and back-office operations, and two of the couple’s children — Andrew (AJ) and Lainey — help out part time. Youngest son Elliot is following in his dad’s footsteps and focusing on basketball at the moment. As for Adam, he’s most comfortable up front, visiting with customers and making sure their experience is positive.

Adam is thankful for the role Golden West plays in helping him run the business.

“Golden West is one of those fantastic community members that is just ingrained in our business,” he says. “Every important service that we utilize is run through Golden West. They facilitate everything from our social media to our phones and internet connection. We don’t trust anybody else. They are a great company. They have come through for us time and again!”

As for the future, Adam has found his niche and has no plans to abandon that.

“My future is going to be here,” he says. “Interacting with people and just doing what I do. Running the store and being in the community.”

No matter how you slice it, that’s good news for the hungry people of Hartford.