How South Dakota Helped Save the World from Nuclear Calamity

How South Dakota Helped Save the World from Nuclear Calamity 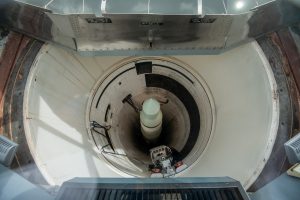 Buried beneath the plains of Western South Dakota just a stone’s throw from the Badlands lies a fossil of sorts. It could unleash more power and destruction than the mightiest of dinosaurs, but luckily, was never provoked into a confrontation.

The Delta-01 Launch Control Facility is a Cold War relic located just off Interstate 90 … yet many people are unaware of its existence.

A Time Capsule on the Plains

Everybody’s familiar with South Dakota attractions like Mount Rushmore, the Badlands, and the Corn Palace. Less well-known — but every bit as fascinating — is the Minuteman Missile National Historic Site. It was established in 1999 to provide historical context about the Minuteman missile defense system during the Cold War.

The complex, managed by the National Park Service, has three sites along I-90 between exits 116 and 131. These include a missile silo containing the last intact unarmed Minuteman II ICBM (Intercontinental Ballistic Missile) in the U.S., a Launch Control Center, and a visitor center.

The visitor center features a variety of exhibits, a 30-minute film, and park service employees to help tell the decades-long story. Visitors can also stop by and see the Delta-09 Missile Silo from above ground and stop by and walk to the gate of the Delta-01 Launch Control Center. A cellphone guided tour is available to use at both Delta sites, and virtual tours are available online.

With a little advanced planning, guided 45-minute tours of the Delta-01 Launch Control Facility, including a trip underground, are available year-round. Reservations can be made online or by phone (605-717-7629) up to 90 days in advance. This tour is the only part of the Minuteman Missile National Historic Site that involves a fee. 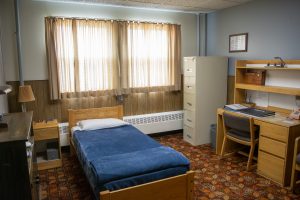 Taking the tour is like stepping back in time. The above ground “soft support” building is a nondescript ranch house easily overlooked by passing travelers. The tour begins upstairs, taking you through a security office and armory, day room, kitchen, and sleeping quarters. This was home for eight topside personnel, including a facility manager, cook, and security police, who worked onsite for three days at a time. The décor is unchanged from the 1960s, with vintage flourishes throughout.

“We try to keep it just like it was when the Air Force walked out in 1994,” says Chief of Interpretation and Education Joseph Brehm. 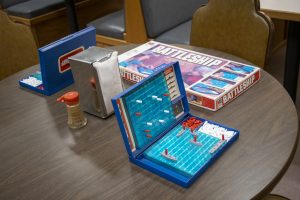 Delta-01 was one of 15 Launch Control Centers in western South Dakota. Each facility controlled 10 Minuteman II nuclear missiles. Altogether, there were 1,000 missiles spread across the Great Plains. It was built in 1963 and remained operational until the mid-1990s, after the U.S. and Soviet Union signed the Strategic Arms Reduction Treaty (START).

“The START Treaty was signed by George H.W. Bush and Premiere Gorbachev in 1991,” Joseph explains. “It allowed both sides to keep one launch control facility and one launch facility [silo] for historical and educational programs.” 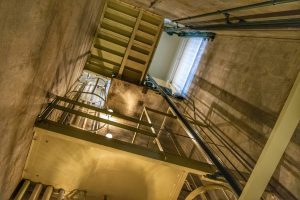 Once you’ve toured the top portion, you’ll descend 31 feet underground via an elevator to the Launch Control Center, a capsule suspended from pneumatic shock absorbers and surrounded by four-foot-thick concrete, three-inch-thick steel bars, and an eight-ton blast door to protect the crew. The acoustic enclosure, as it’s called, was staffed by two missileers — a combat commander and deputy commander — working 24-hour shifts. 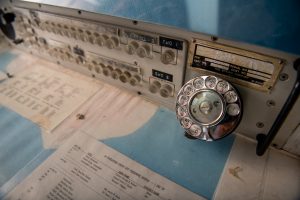 The atmosphere inside the acoustic enclosure was tense for the missileers. The U.S. and Soviet Union had formed an uneasy alliance during World War II, but tensions deepened when it came time to divide up postwar Europe. The U.S. aimed to stop the spread of Communism while the Soviets attempted to expand their influence. This kicked off a nuclear arms race that came to be known as the Cold War. By the 1960s, each side had amassed weapons so deadly they had the ability to wipe out major cities, kill millions of people, and alter the earth’s climate, leading to global devastation. Crews assigned to Launch Control Centers like Delta-01 might one day be called upon to launch ICBMs on the Soviets.

Fortunately, that never happened. The concept of “Mutually Assured Destruction” was an effective deterrent in preventing the missiles from ever being deployed. The missileers’ main duties involved monitoring the status of the ICBMs, authenticating radio messages, and alerting security whenever motion sensors were tripped. The job could be tedious and boring, with little to break the monotony other than books and a bunk that allowed one person at a time to nap. 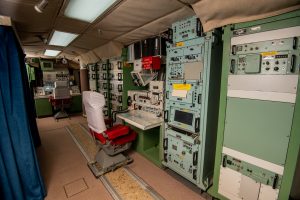 Code authentication books and a pair of keys were within reach should the order to launch ever arrive. Strict safety protocols prevented anybody from going rogue.

“The missile combat crew stayed together, so two people had to turn the keys,” Joseph says. “But it takes two launch control centers, so it’s four keys to actually start anything. And the enable code, in each one of these places on the commander’s desk.”

Golden West even played a small but significant role in the nation’s defense.

“Golden West was the primary telecommunications contractor,” Joseph says. “They provided telephone communications for the local area and were doing a good job while still a small cooperative. When the contracts came along, Golden West got a big contract from the Air Force to provide all the communications.”

While all the top-secret gear and equipment were removed when the site was decommissioned, the Launch Control Center is otherwise exactly as it looked during the Cold War. It’s well worth a visit for anybody interested in history. Even the casual observer will find it a fascinating, if chilling, reminder of just how closely we tiptoed to the brink of Armageddon before wisely taking a step back.

Sources: Some information for this article was provided by online articles from NPS.gov, History.com, and AtomicArchive.com.